Hundreds of illegal migrants targeted in a Saudi nationwide crackdown turned themselves in on Sunday after security forces besieged a Riyadh neighbourhood where riots had killed two people.

Men, women and children lined up carrying their belongings to board police buses transferring them to an assembly centre before their deportation, a week after a seven-month amnesty expired.

Police said they intervened on Saturday following riots in the poor Manfuhah neighbourhood of the capital after foreigners attacked Saudis and other foreign expats with rocks and knives.

One Saudi and another person, whose nationality and identity remains unknown, were killed, said a police statement carried by the SPA state news agency.

The Manfuhah district of Riyadh is home to many illegal migrants, mostly from east Africa.

Foreign workers carry their belongings as they leave the Manfuhah neighbourhood of the Saudi capital Riyadh on November 10, 2013

On Sunday, police laid siege to the district while units from the National Guard and special forces were sent in, an AFP photojournalist said.

The Ethiopian government said on Saturday it was repatriating citizens who had failed to meet the deadline of a seven-month amnesty, citing reports that an Ethiopian had been killed by police.

"They were trying to get them in the camp before repatriation and in that process... an Ethiopian has been killed with a police bullet, but we are verifying it," foreign ministry spokesman Dina Mufti told AFP in Addis Ababa.

Saudi police said on Saturday illegal migrants in Manfuhah have been given the chance to come forward and that accommodation has been made available while their repatriation is arranged.

On Monday, the authorities began rounding up thousands of illegal foreign workers following the expiry of a final amnesty for them to formalise their status. 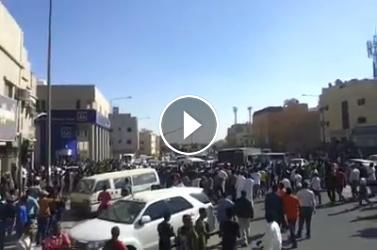 Hundreds of illegal migrants targeted in a Saudi nationwide crackdown turned themselves in on Sunday after security forces besieged a Riyadh neighbour...